Hi All, I hope that this post finds everyone well and staying cool if it is anything like it is here. Here in the hills of East Tennessee the girls and I have been braving near 100 degree temperatures. So far we are no worse of the ware just having to take things a bit slower and take care to keep the girls as cool as possible.

This post is going to be a bit different. I have had several readers express interest in the details of “The Kuntry Klucker”. I have several comment and inquires about the construction of the coop and pen so that they can use our design to make their own pen for their flock. So, in this post I am going to include as many pics and as much commentary as possible to describe the construction of our set up.

I do not have any plans or blueprints for our design, we really did just built this off the cuff. We have no formal experience in either carpentry or construction. So this was indeed hubby and I nailing together wood in the form of a pen to give our girls a nice home. So far it has withstood mother nature for 6 years, so apparently we did a pretty solid job for not being experts in the field of construction. Ok, so without further ado, I present the details of “The Kuntry Klucker”.

First lets talk about the coop. The coop itself is about 7×5 feet. The roof is a bit harder to pinpoint because it is slanted as to move the rain and water off the coop towards the back. The roof is noting special, it is just scrapyard sheet metal. I like metal because noting can chew or claw their way into the coop from the top. It stands about 2 feet off the ground to discourage any varmits from living under or digging into the coop from beneath it. Additionally, during the rainy season if the pens floods (which it has at times) the girls remain safe, dry, and warm inside the coop.

The coop has several features that I added to it that make it a great home for my girls. First off, the side door, which I call the egg door is a dual purpose door. I open this door to collect eggs which are right inside in the nesting box. Secondly, it is a great opening  to use during the summer to put a box fan in the coop for extra ventilation and cooling in extreme summer heat. And Finally, when conditions are good I have a removable latter that I attach to allow the girls access to the outdoor run area. I currently have them in the pen due to severe storms expected later this afternoon. Once they are out in their play yard they hate to come in. So I have to keep them confined to the pen when we are expecting bad weather.

The lower back of the coop in on hinges so that I can lift up the entire flap to get access to the coop for cleaning, filling feeders, and giving them fresh water. Inside the coop I keep a 1 gallon feeder and waterer. Doing times of severe weather they will often times reside in the coop till the storm has passed. In this summer heat I don’t want them to be without water so I keep a small supply of food and water in the coop. They tend to use it more in the winter time when it is too cold to go out into the pen.

cleaning the coop is very easy. Each morning I turn over the bedding with the droppings from the night before. I usually clean it out complete and replace with new shavings when it gets really dirty or stinky . Usually about twice a month or so. In the winter it is more frequent due to the fact that they spend more time in the coop.

The coop has a solid wood waterproofed floor. So they stay plenty warm in the winter and cleaning the wood floor is a breeze. A few times a year I will spray it out with a hose to get all the dust and other debris out. It dries fast and I put clean shavings in and other necessities back in their place.

Ok, so now for the pen. The pen is about 7×14. It is roughly 7 feet at the peak. I am 5’8″ and can stand up with my arm above my head to hang things and have no trouble. It is tall enough for a grown man to comfortably walk in and do chicken chores. I know this because hubby at times has to pitch in and he does not hit his head on the top beam of the pen.

the pen is connected to the coop. We literally have 4 2×4’s attached to the coop to both offer stability of the coop and closing gaps to not allow any critters access to the pen and coop. The large boards that serve as the foundation or footers of the pen are cemented into the ground by about 6 inches or so. they are very wide boards, I think they are 2×8 or something near to those dimensions. So nothing is able to dig under to get into the pen. Also, since we have a ring of cement under the pen providing the foundation it is impossible for the wind to lift the pen into the air if we have a huge storm. 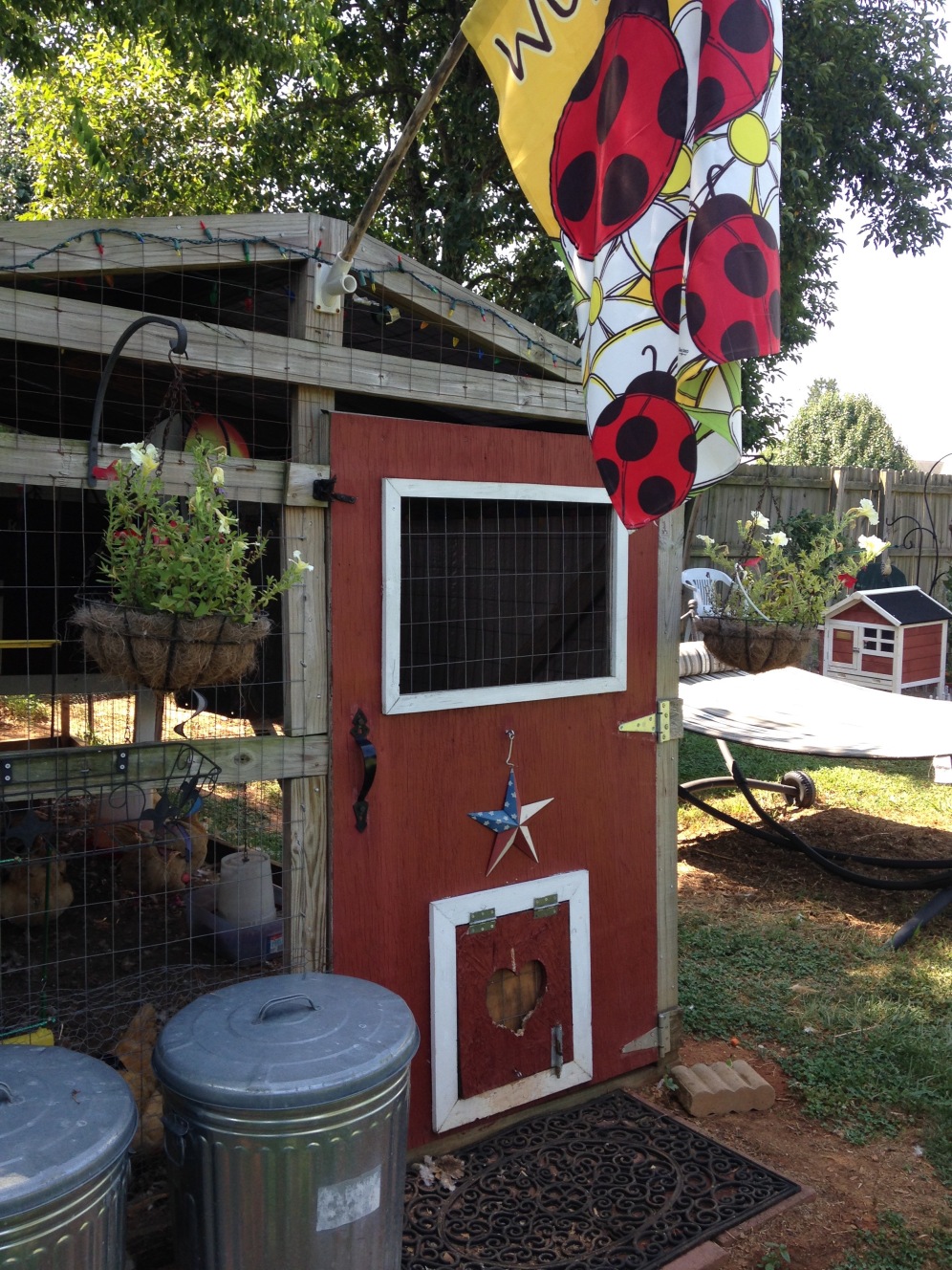 Part of the design in the pen’s wind worthiness is that we allow the wind to pass through. Above the door is a triangular opening which allows wind to pass into the pen. Opposite it, above the coop is the same triangular opening allowing the wind to exit the pen. With the tarp being our roof, wind could easily get trapped and lift the tarp in attempts to decompress causing both damage to the construction and injury to the girls. With these wind funneling points and the fact that the pen is securely cemented into the ground it has braved some very instense storms .

Now for the form of the pen in general. It has 4 main 4×4’s forming the corners of the pen. Two in front at each corner, and two in back in front of the coop. One central bean where the “rafters” of the pen are attached to. The side beams are angled for a plumb attachment to the large 2×8 beams that are part way buried under the ground. The rest of the roof boards are 2×4’s which just attach the central beam.

The top of the pen is lined with galvanized fencing so that no animals can get access to the pen even if they manage to rip the tarp. The tarp which acts as the roof just lays on top of the fencing and is secured at the bottom of the tarp. The tarp is easily replaced if hail or other elements get the best of it. This was our way to construct a budget friends roof. With a pen this size, constructing an actual roof with shingles and so forth would be both hard and expensive. It could be done but we decided on this instead.

The tarp provides much shade and rain protection. If we get a storm that has some pretty severely wind driven rain the outer permitter  of the pen will get wet. But for the most part the middle of the pen will stay nice a dry. The tarp has a long over hang which provides a lot of of protection even to wind driven rain. But once in a while when we get a doozy of a storm the permitter of the pen will get wet. Only once to twice has it actually flooded. This is usually when we get hurricane remnants pass over that drop rain for days. In these storms even basements flood so I don’t think anyone is really safe in these situations. When this happens, the girls usually stay in the coop so its not really a big deal. It drains pretty fast once the rain stops.

I hang the food and water from a beam forming the roof. I do this to keep them from accidentally spilling it, and also to keep debris from them scratching around from getting into the food and water. They are heavy galvanized chains to support the large waterer and feeder. I also hang various other decorations from the roof including the power cord that supplies power to the fan and their christmas light. I keep their lights on year around, and their fan going in the summer as long as it is hot.

The door of the coop is just a large human sized door attached to the pen with heavy fencing hinges, handle, and latch. It is large enough to get a wheel borrow in the pen for cleaning if needed. It is a heavy door which also offers protection from predators. At the bottom of the door is what I call the “chicken door”. This little door opens to allow the girls access to the backyard. This way they can come and go in and out of the pen without leaving the door wide open. This keep wild birds and other things for getting into their pen when they are free ranging. I am not sure of the dimensions of this little door. It is large enough for my standard Buff Orphingtins girls to come and go comfortably without getting stuck. My big rooster Roy can even stand in the threshold without any problem. This is by far my favorite feature of the pen, people just love the little pet door on the large human sized door. 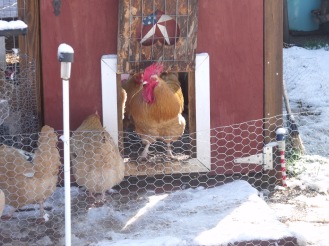 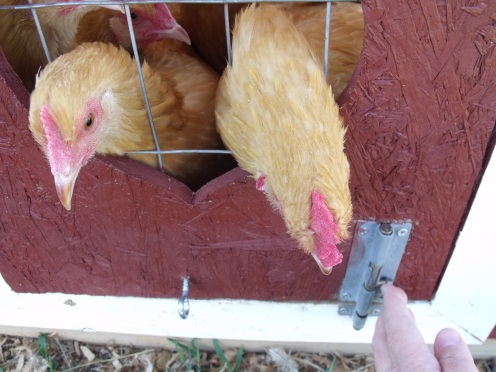 There is a heart cutout on the door so that the girls can see out from the other side of the door. They get pretty excited when I open it, I think they are trying to figure out the latch. It opens and attaches to the large human sized door so that it does not close on them leaving them stranded and no access to their pen. Every now and again we have to replace this door because they tend to peck at it more than any other part of the coop. We just trace the previous door, use a jig saw to cut a new one, reuse the hardware and a new door is installed. there is also a barrel latch in the inside of the door for extra protection. Should a critter figure out  the outside latch they still cannot get to the inside latch to open it.

well, I think I am all out of details to talk about in terms of our coop and pen. I do hope that I was able to at least answer some of your questions. Hopeful all the pics were a big help too. They say a picture is worth a thousand words, I hope in this case it rings true.

Thank you for reading, till next time keep on crowing!