Well, I was finally able to do some much needed landscaping or “coop-scaping”  as I call it around the chicken coops this week. It is something that I have wanted to do for a few years but just did not have the means to get it done. This year I made it a priority to liven up the girls digs and Roy’s Roost as well. For this post I will show what I did for Roy and Miss Katie. 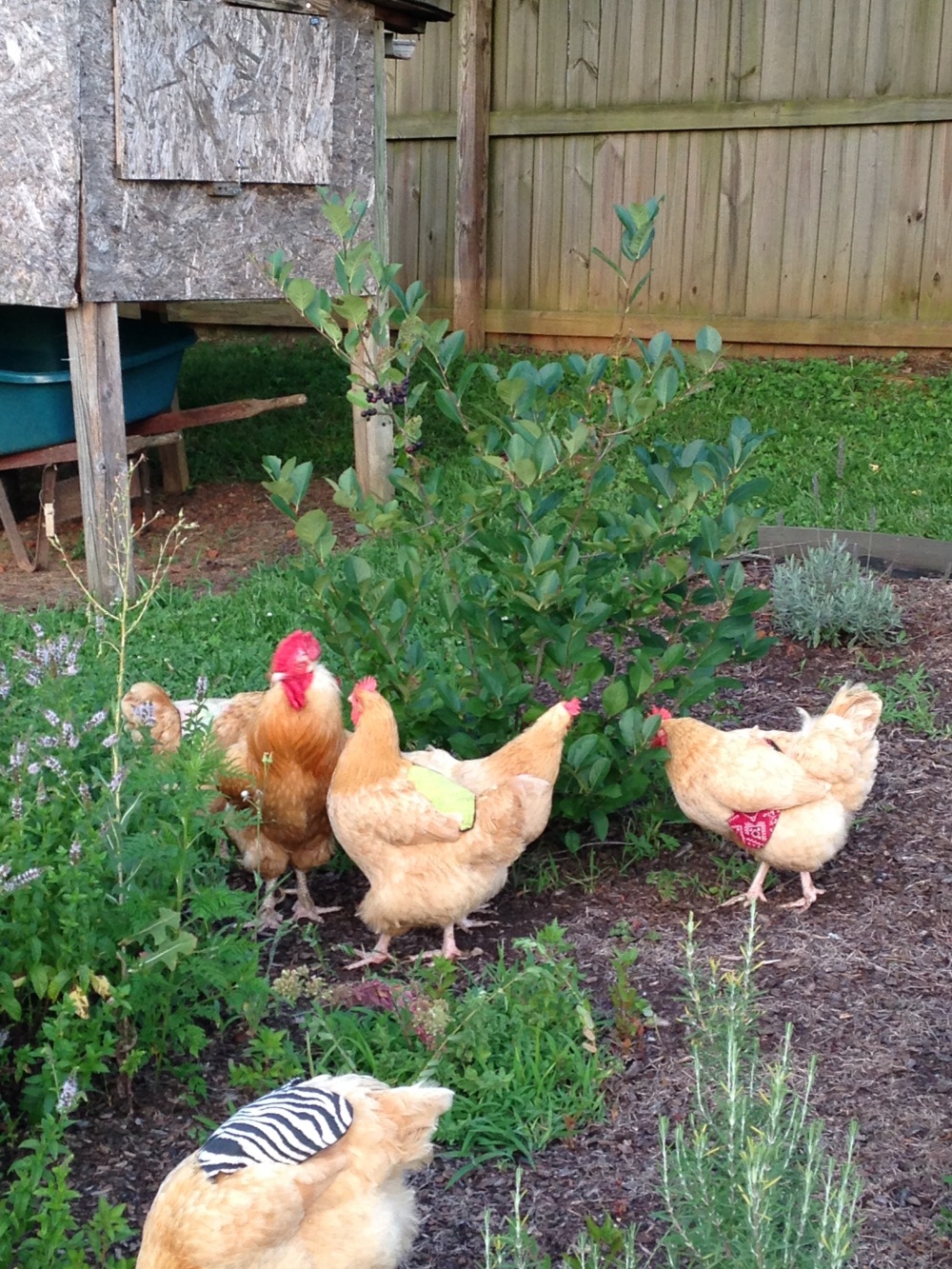 I have Roy’s Roost in my spice/herb garden in my backyard. Roy, when free ranging would always spend most of his time lounging and patrolling this particular garden (I have 7 gardens in the backyard so he actually has his pick). I am not sure if it has the best bugs, shade, or tasty greens. But for whatever reason it is his favorite. On the heels of that, when deciding where to put his coop there was no other location but his favorite garden. It must be nice to live in the garden, literally. I had to transplant some of the plants to make room for his coop and pen but that was not too hard.

Anyway, after making room for his coop and pen I needed a landscaping plan. I took a while to think about it before I bought all the decorations necessary to make it as attractive as possible. Finally, after the plan was complete and purchased, the fun part began. 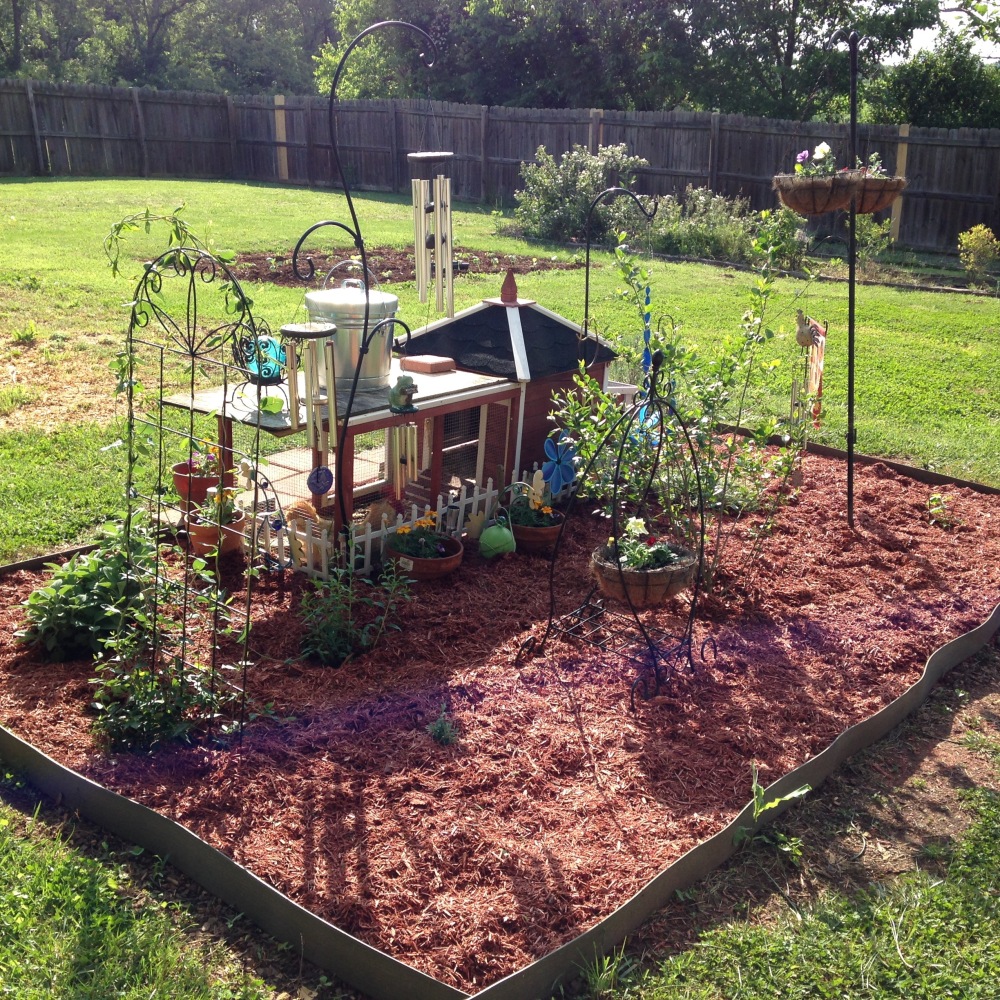 First off, what home in not complete without a front porch. So I purchased some paving tiles and placed them at his pen door. It serves as both a standing area when I service his coop and a mudd deterrent when we get the heavy rains in the fall in winter. In addition, I have a pot of marigolds and petunias as his door step because who does not like flowers at their door. 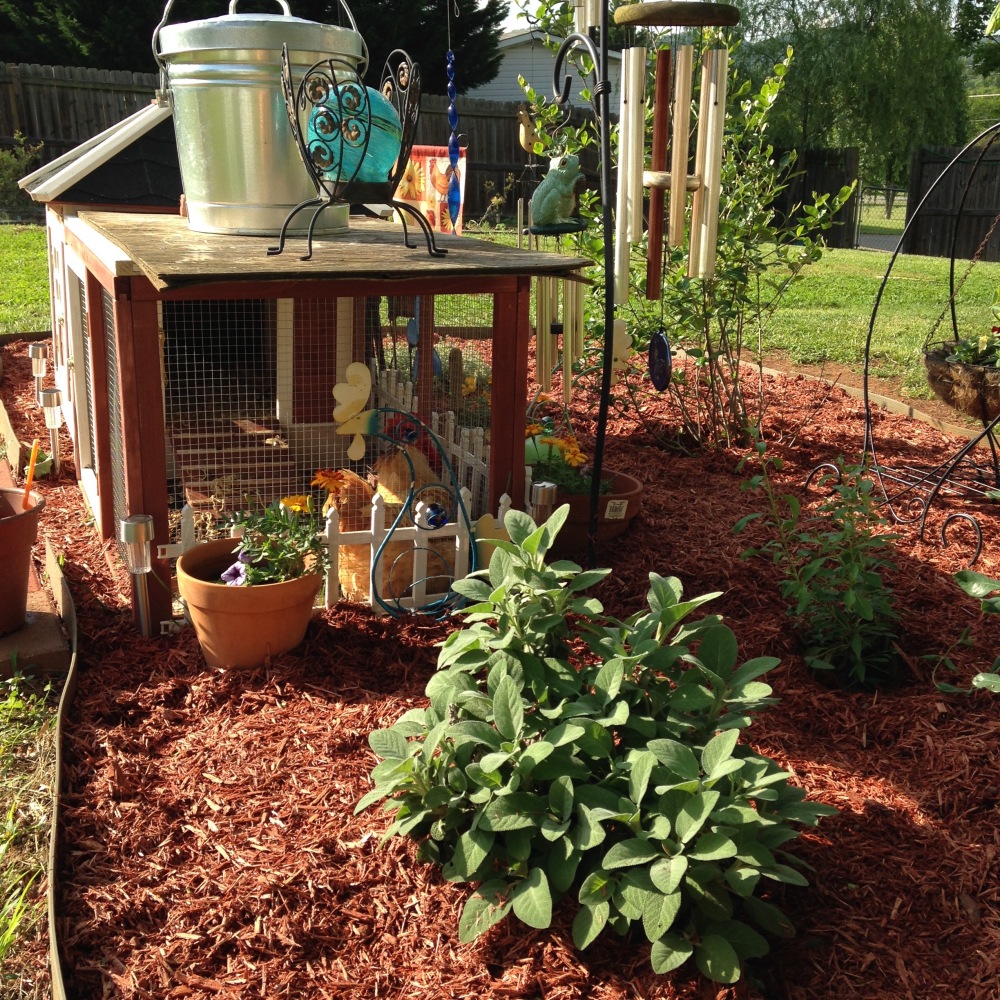 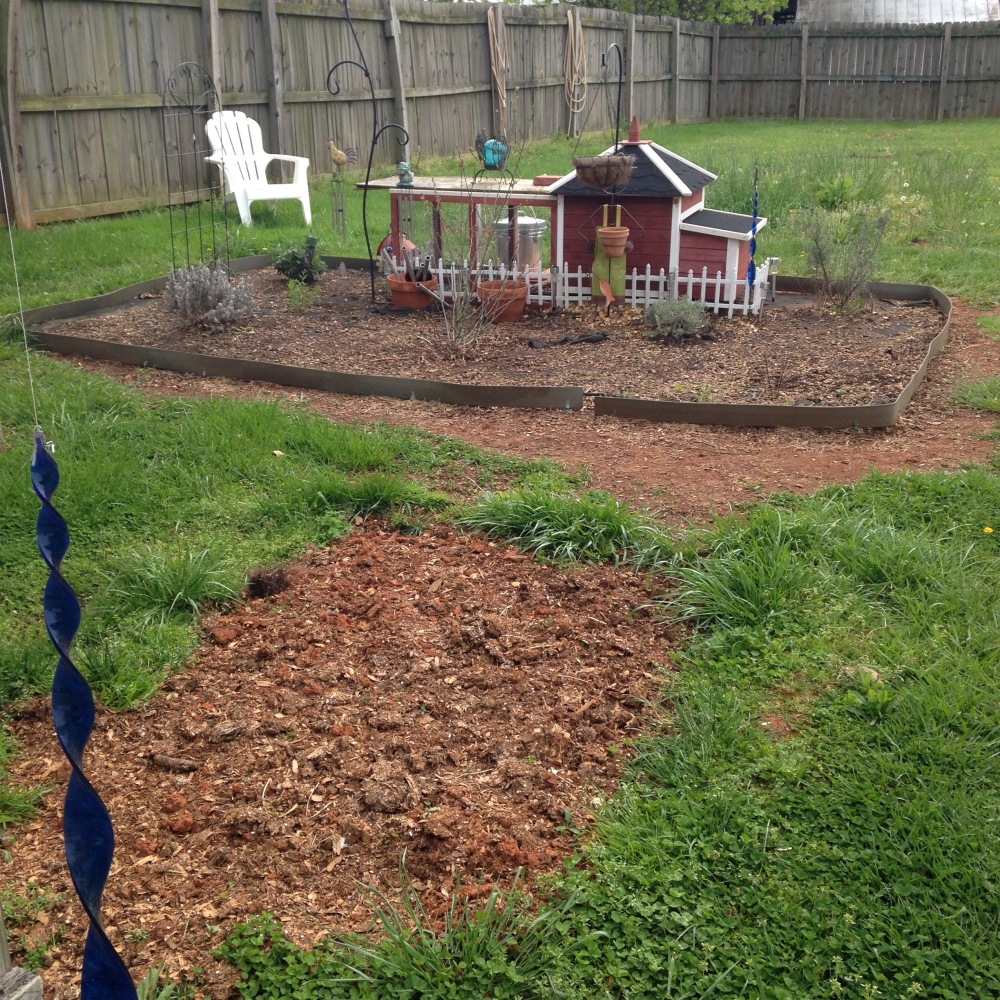 This (above) is the before shot of his pad before I added the coop-scaping decor and flowers. Up till this point all I had completed was the white picket fence around his coop. It does not really serve any purpose but just to have a white picket fence around his home. I have always wanted one, but since that is not always practical I had to make sure that he had one to decorate his pad.

And…here is the after picture. I have added hanging flower baskets, potted plants, and wind chimes. Amongst the already planted herbs is a Gogi berry bush, Gooseberry bush, and an Arona Berry bush. All of which I planted this spring with the exception of the tall Arona Berry Bush currently loaded with many white blooms. Roy loves this tree and picks berries from it every year. I get what grows toward the top and let him have what grows at his level. 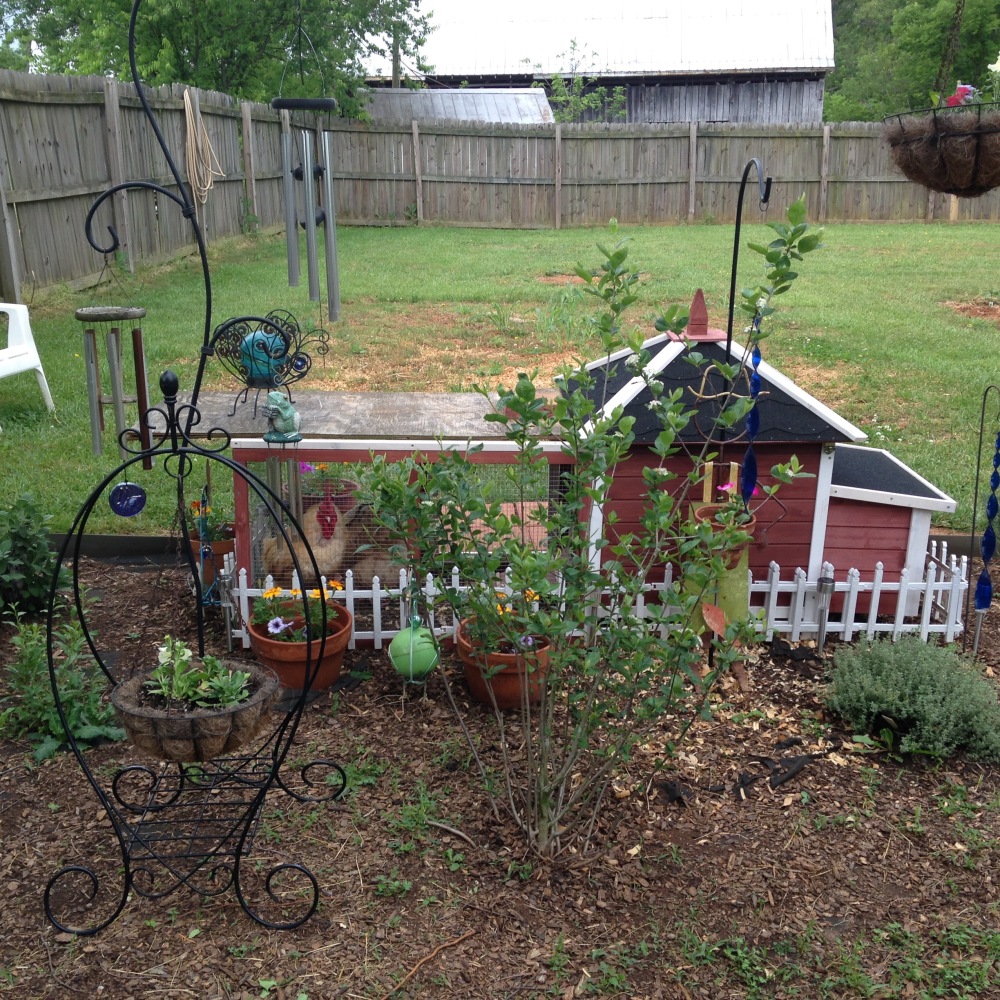 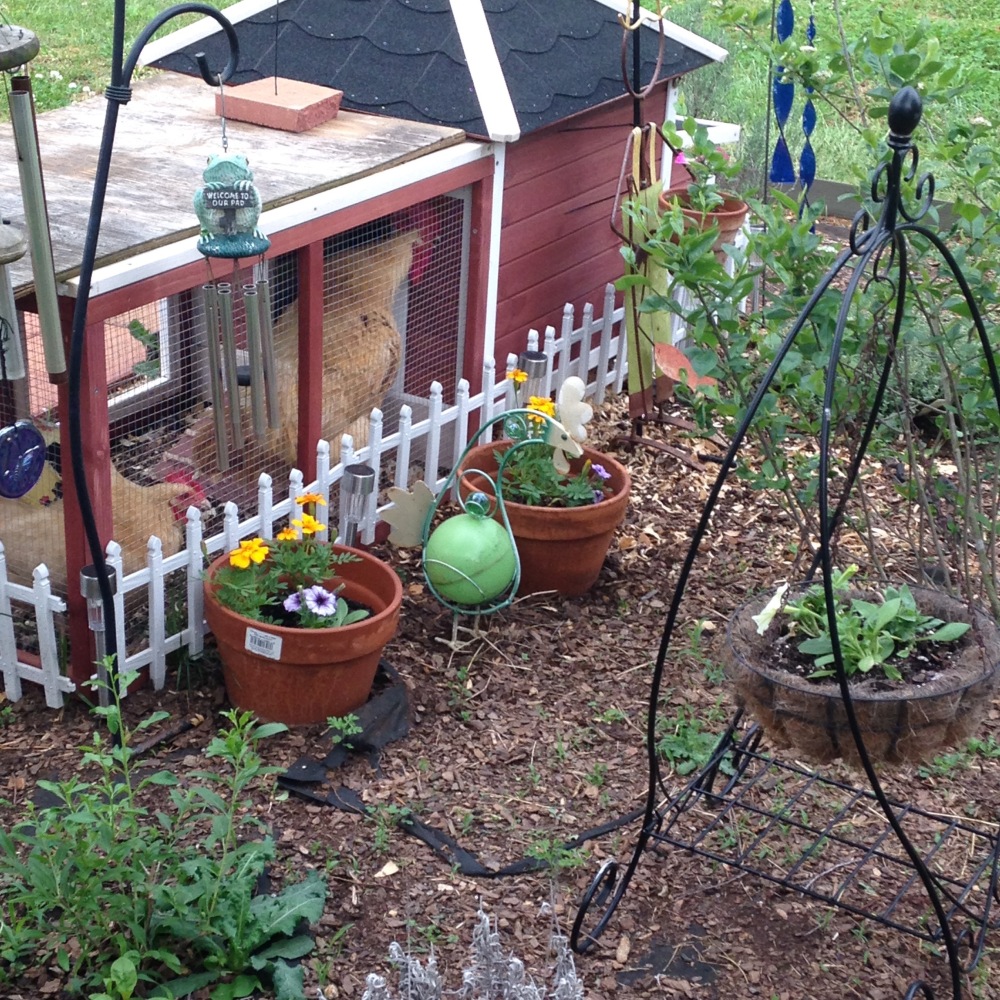 Here are some closer images of the coop-scaping around his pad. The pots contain marigolds and petunias. I chose these flowers for around his home for a few reasons. One, flies and other insects do not like the marigolds, hence they are natural bug repellant. Second, they are edible for the chickens. Since my girls like to sample the land I make sure that I plant things that are safe for them to eat. Finally, they hold up well around the girls. Some plants do not take being snacked on very well, they wilt and die before the season is up. The Marigolds and Petunias are very resistant and last well into the first killing frost of the late fall season. When I plant in my backyard I have to plant with care for the girls sake and for ours as well. I need things that hold up well to a flock of chickens and their curious nature. 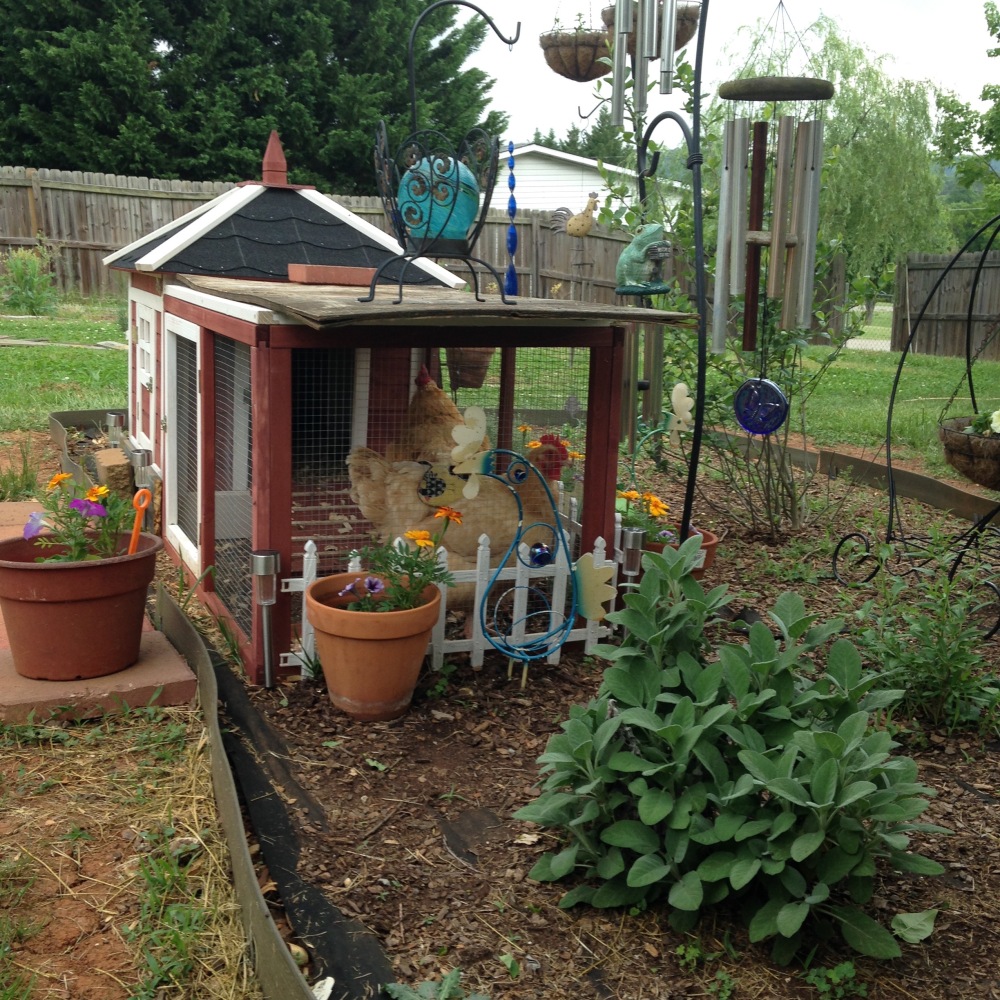 Finally, the view from my favorite chair in the backyard. I love to have my coffee in the morning relaxing listing to Roy crow and taking in the morning air. This was my scene this morning when I was enjoying my “Wake up with Roy time”. I usually have the pen door open and Roy and Katie out in the yard. But we have a hawk that is currently scoping out our yard and I wanted to keep them close to the home for their protection. Roy was attacked by a hawk several summers ago, so I take their interest in my chickens seriously. Roy and Katie don’t seem to mind it, they seem to sense the danger as well. I make sure that when I have to keep them in their pen for their safely that I stock it with lots of treats and tasty morsels.

I also have the Kuntry Klucker coop-scaped and ready for the spring and summer season. More on that next time.

Till then thanks for stopping by and keep crowing!