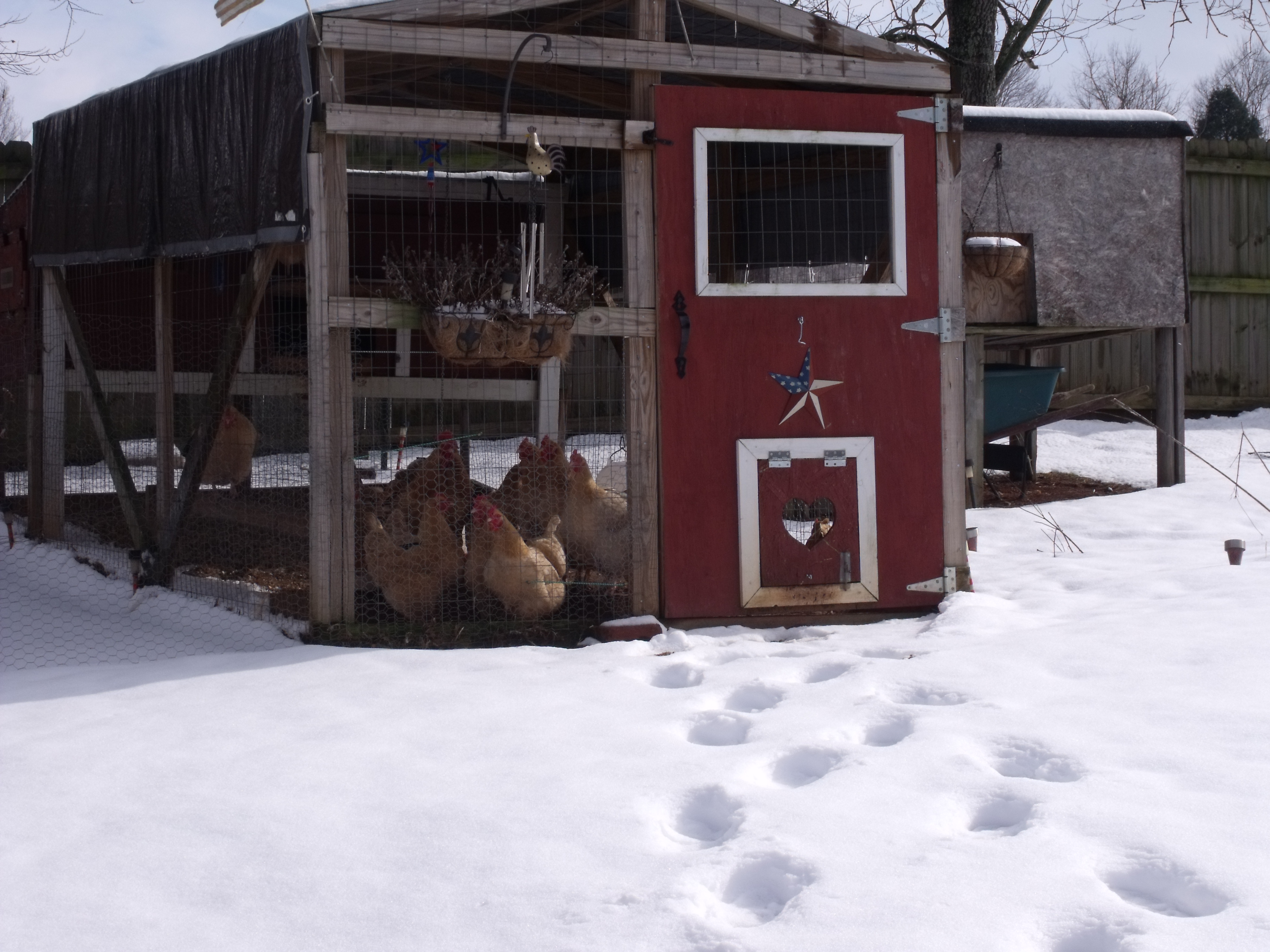 Hey there again, the girls and I have a winter’s tale to share.

Last year we had the most snow that I have ever seen here in these hills in about 10 or so years. We were battered with two ice storms then several snow storms all within a span of a few weeks. When it was all said and done, we had an accumulation of 12 inches of snow on the ground. Now most people know that farm animals are all weather, not much seems to bother them. Well for my pampered poultry, this was not the case. You see, I found out that my girls hate snow. They are scared to death of it. The white lava might as well be an enemy that needs immediate extermination. I make sure the they are protected from predators in both their coop and pen. But snow, I can do nothing about. So, after a few days of being cooped up (quite literally), I decided to try to get them out of their coop and pen for some fresh air. The result was as funny as can be.

First, after I plowed my way to the coop, I had to convince the girls that the snow was not going to kill them. Upon getting to the coop I found this, Miss Betsy trying to get as far away from the nemesis white stuff as possible. She would not even put her pampered pedies on the pen floor, which was dry except for the parts near the edges where the snow had drifted in.

Next, I had to lure them out with their favorite treat. Scratch! Chicken scratch is a treat from the gods, they love this stuff. They practically fall over each other when I come out the the coop with a cup full of their choice eats. 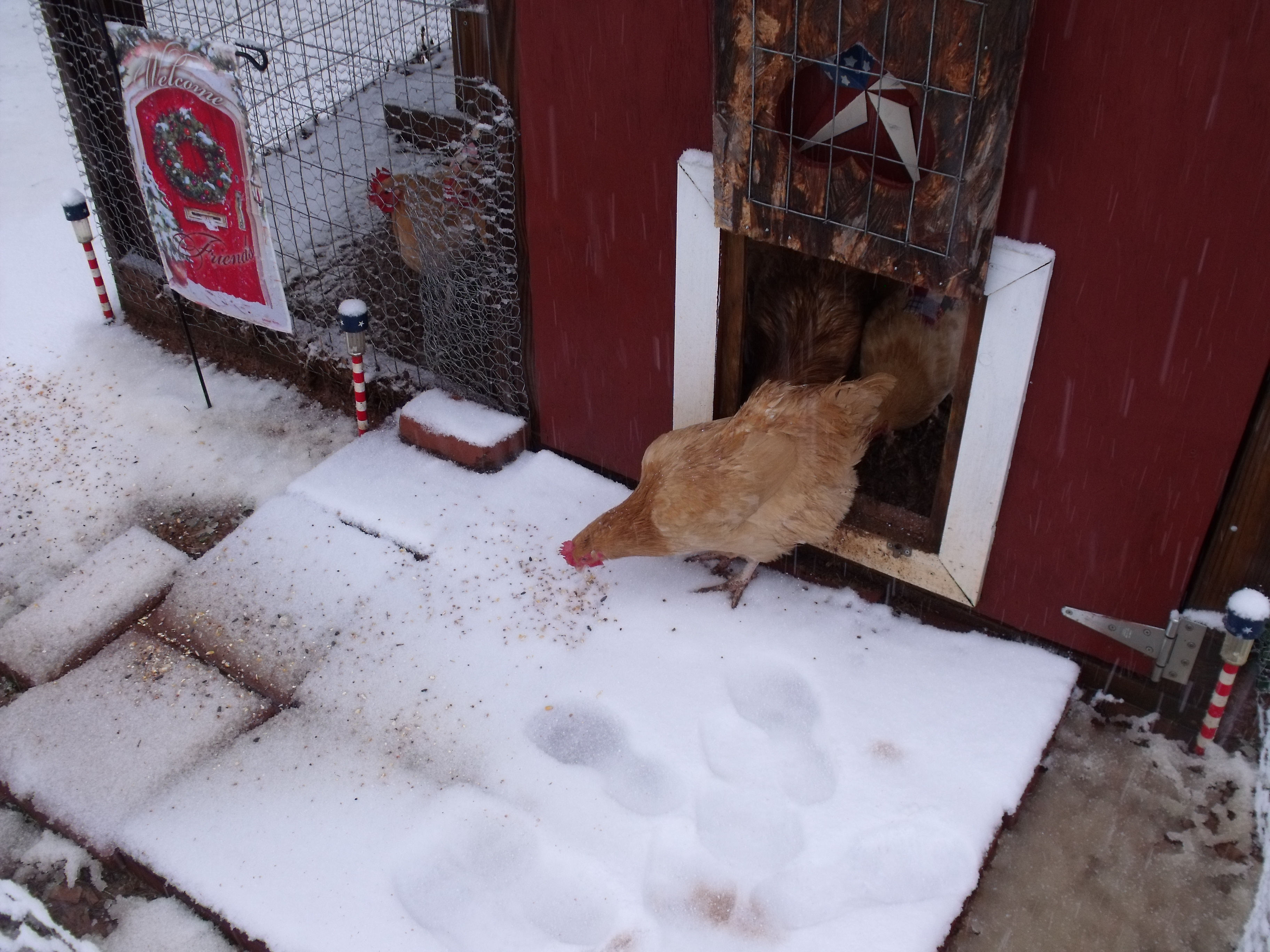 Miss Bossy was our brave taker, she cautiously approached her favorite treat laying in the dreaded white stuff. As the others watched carefully to make sure that it was not going to kill her. Eventually they too ever so cautiously started to approach. 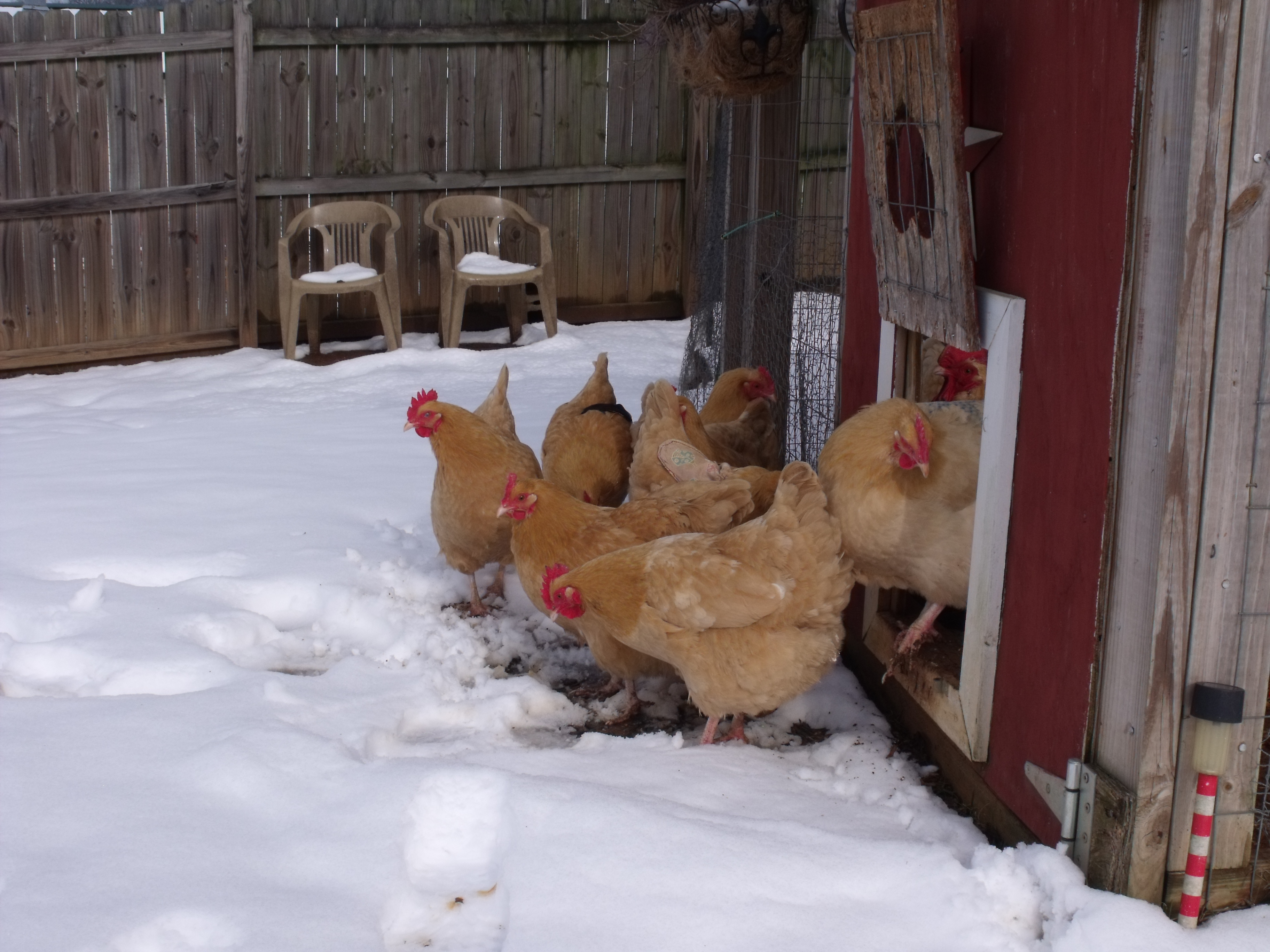 After some time the rest of the gang got the idea that the white stuff was not a complete threat. The power of the scratch was just too strong.  The girls started coming out one by one. They are still not too sure about the stuff, so for a while they pecked at it and scratched at it, finally deeming it safe to take the plunge.

The sole brave taker again was Miss Bossy who took the plunge, wading in snow that covered her legs. If you have ever seen a chicken attempt to walk in deep snow, it is quite a funny sight. So while the girls are taking the snow in stride, Roy on the other hand is thoroughly convinced that he needs to somehow exterminate the white stuff. Since he is terrified of the white stuff, he decided that a decent growing was in order.

For the first day, this was as brave as Roy got. He stood in the door way and restlessly crowed at the white stuff. After, he finally decided that his efforts were to no avail, finally accepting defeat. He stayed in the pen the rest of the day sulking. After all tomorrow is a new day, right? Well…

More snow fell the following night, the girls decided they had enough of the white stuff and refused to come out of the pen. So I decided to plow paths for them to walk on in the backyard. Apparently they do not like the feel of the snow on their feet. Come to think about it, I don’t think I would like it either. So with my snow shovel in hand, I cleared several paths for the girls to walk on. I had no idea at the time, this turned out to be the funniest thing ever.

You see, once I cleaned them a few paths, they would only go as far as the path would take them. In other words, when the path ends the chickens stopped. On the heels of that, I plowed them a maze in the backyard. It was the funniest thing ever, I still regret not getting a video of the girls working the backyard maze. However, I did snap a few pics that day, below are pics of the girls trying to figure out how to navigate the maze in the backyard. 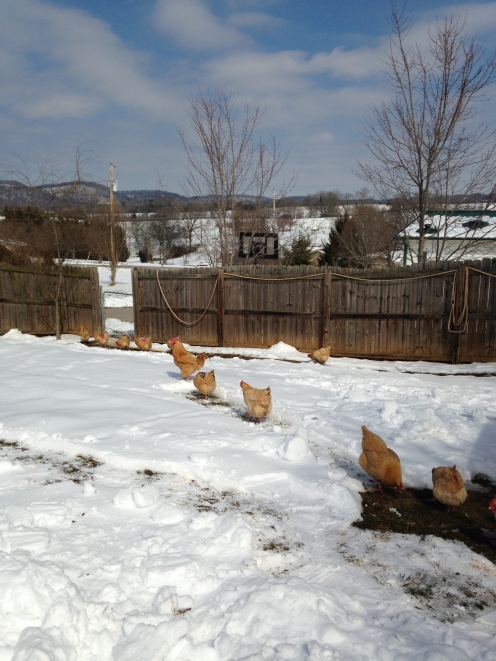 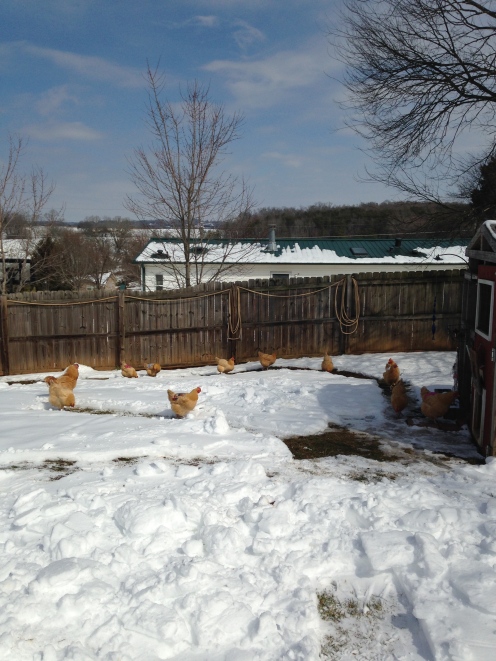 I will have to say they failed miserably. They could not understand why they could not get back to the coop once they got far into the maze. They would take a path and get stuck because it lead nowhere. Since they refused to walk in the snow, the flock botted necked at a dead end. After a while to help them out, I put a trail of scratch on the paths that lead back to the coop. The flock readily accepted the offer. It event was an educational experiment in testing the my flockss ability to learn, remember, and problem solve.

We will see what the rest of the winter brings. If we get more snow I will be prepared again to plow them a maze to solve.  When presented with fresh snow some people build snowmen, others conduct experiments on the mental capacities of a flock of backyard chickens. However, we could not resist the urge to build a snowman.

Thanks for reading. We wish everyone an Merry Kluckmas and an Egg-celent New Year.

Till next time, keep on crowing.