Hi Everyone, welcome back to the Kuntry Klucker Farm. Today the girls experienced an astronomical event that has captured the attention of the nation. At 2:30 pm this afternoon the sky darkened in the sky over our little farm here. I set up time lapse cameras on both coops and captured their reaction to evening setting in on their afternoon. I am not able to post those videos here due to platform issues right now, if you want to see them you can catch them on my Facebook page, the link is in the “contacts” section of my page.

So without further ado, allow me to tell you how the girls took to the sky darkening during their afternoon. As they were enjoying their day of hunting and pecking in the gardens something spectacular was about to unfold over their heads. As the sky slowly started to darken they did take notice to the early approach of evening. I could tell that they were starting to wind things up for the day. As they continued to graze in the backyard their heads looked around trying to see if everyone else was getting ready for bed. As they continued to peck at the ground more and more of the girls looked up to see what everyone else was doing. They seemed to look to each other as if there is some kind of que they were waiting for. The pure confusion as they stood it the shadow of the moon was nothing less than entertaining. Sadly, the totality did not last long enough for them to actually roost but they did make their way to the pen and got their last sip of water and bite of feed before they would go up the latter for bed. I wished that totally would have lasted a bit longer but it was funny watching them be rather confused as to why bedtime was coming so early.

Below are two photos taken from my time lapse videos that I took recording their response to the eclipse. As you can see it got quite dark for a few moments, but not long enough for them to make their way up the latter to the coop. Instead they just froze in place as all of a sudden darkness fell on them as they were doing their rounds in the garden searching for delicious bugs to dine on.

Their response to the eclipse was that of dumfounded confusion as evening came on so suddenly that they did not have much time to really react. I was hoping that they would go to roost just to have the sun come out again to finish their day. Although I did not get the pics of the girls that I would have liked to had I did get some good pics of the Eclipse. Below is a chronological order of the Moon over taking the Sun. 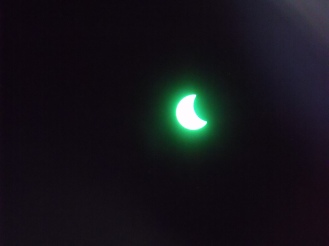 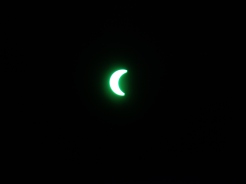 Thanks for stopping by and spending a little time with the girls and I. Till next time, take care and keep on crowing.