Hello all, I hope that this post finds everyone well and enjoying the summer. I have been pretty busy here at the Kuntry Klucker this summer. My gardens are in and in full swing. I am already eating fresh produce from my backyard and using fresh spices in my cooking. I love garden season and all the bounty that comes with it.

The girls have been busy too. They are out every evening patrolling my gardens and taking in all that the season has to offer too. It has been really hot here lately, so they spend most of their day cooling themselves in front of the fan in their coop. They don’t dare think about leaving their comfy coop till later in the cooler part of the day.

Speaking of gardens, I have a new addition to my spice garden. Another coop, this time for Miss Betsy. You see Miss Betsy has decided that she wants to be a bully to all the other hens in my flock. I don’t mind an alpha hen (head hen) establishing her position, but when the pecking order becomes abusive I have to take action. This is yet another fun adventure of keeping chickens.

I tried several methods to curb her aggressive behavior but nothing worked. I tried to separate her in a small dog kennel to give her and the rest of the girls a break. When I reintroduced her to the flock she basically picked up where she left off. Then I tried to remove her from the flock completely so that she could neither see nor hear the other girls. After a few weeks I reintroduced her and still she bullied the other girls. It got to the point that the flock was on edge living in fear of her aggressive behavior. So I had to come up with a solution to this predicament.

Isolation is supposed to curb her aggression, by denying her both freedom and status I was hoping she would find herself at the bottom of the pecking order giving both her and the others girls a break. But she apparently is an independent thinker who wants it her way. I can understand that.

So after failed attempts of suppressing her aggressive behavior I finally got her another coop. Roy has a neighbor, I placed her little hutch in the spice garden next to Roy’s Roost. So far she likes it and took to it really well. I let her out in the evenings to roam the yard but during the day she takes it easy in her new digs.

My boys call this the “coop-hood”, a neighborhood of chicken coops. I thought that was really cute. So the “coop-hood” it is. I have plans to add one more coop to our now developing coop-hood. I will then most definitely have a full functioning coop-hood 🙂 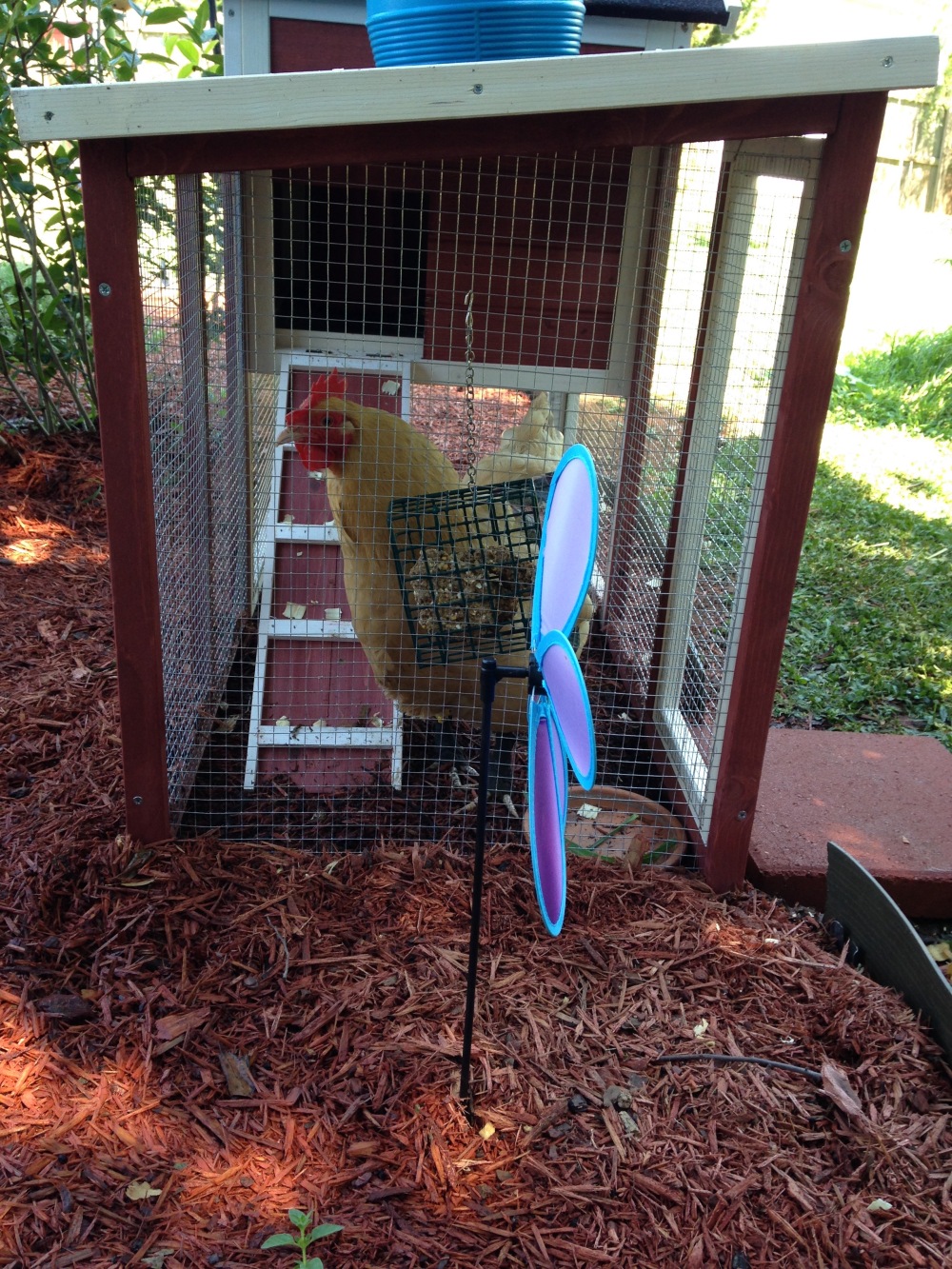 I finally have a peaceful flock again. She has her own place now and can no longer terrorize the other girls. The Kuntry Klucker ladies seem to really appreciate the peace that now reigns in their coop.

I thought I would share this little challenge with my readers. Chickens can at times throw you curve balls, but it is a chance to learn about their behavior and do what you can to understand them and their needs. As for this situation allowing Betsy to move out into her own place was the perfect solution for our little problem. Betsy is a special lady to me, my mother named her and she has always been my best layer. I could never think about giving her away. So I just roll with the punches and do what I can to make my girls as comfortable and as happy as possible. After all, happy chickens lay better eggs 🙂

Till next time, keep on crowing and thanks for stopping by to read about our adventures.